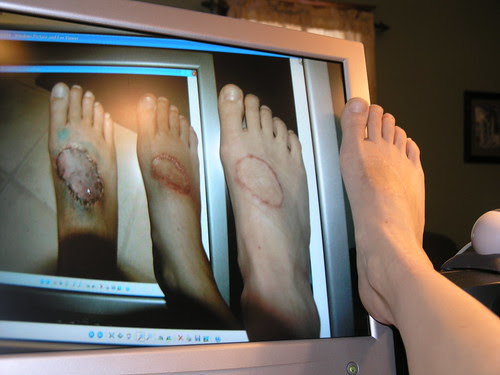 You'll never know what you'll find when you search for "melanoma" on flickr. Check out the photostream for yourself. The photos range anywhere from innocuous to very graphic (medical). I'm assuming they are all SFW. 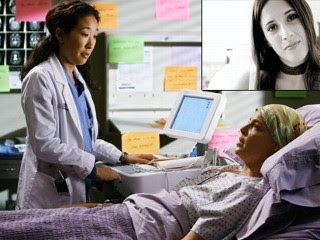 I had no idea that Grey's Anatomy had a melanoma storyline this season. I don't watch hospital dramas generally but I've been seeing spots for the show with Katherine Heigl's character in a hospital bed apparently near death with a lot of sad music in the background so I just figured she was just preparing to commit 100% to her film career next season.

Turns out her character was diagnosed with stage IV melanoma much like a real person, Naomi Williams. You can read about both the show and how it parallels Naomi Williams' life here.
From ABC News:

Woman Battles Melanoma In Real-Life 'Grey's Anatomy' Story
Naomi Williams, 29, was watching a recent episode of the ABC hospital drama Grey's Anatomy, on which Katherine Heigl's character, Izzy Stevens, is battling advanced skin cancer but had to stop because her own experience with skin cancer was still too fresh to endure seeing it unfold on screen.
"The timing is very surreal," said Williams, who lives in Jacksonville, Fla. "It was really intense... too difficult to watch for me."
Like Heigl's character, Williams was diagnosed with stage 4 melanoma -- the most serious type of skin cancer -- about one month ago. The cancer was discovered after she broke a bone in her back bending down to put a plug in a socket. Subsequent tests revealed that she had cancer in her bones and her lungs.
"That was the red flag that started it all," Williams said of her bone fracture. "The question was, why are you 29 and healthy and having a bone fracture? The diagnosis was malignant melanoma but they can't find anything on my skin to show that it's melanoma."